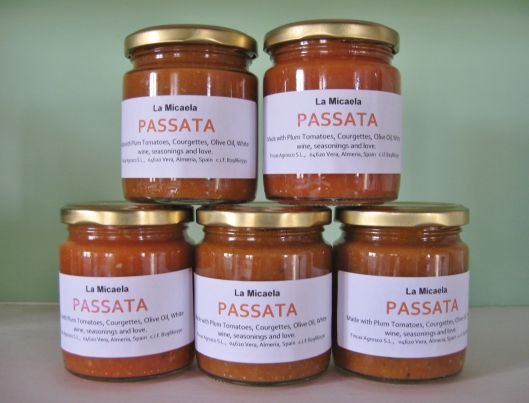 Each method has  its advantages. For the first you obviously don’t need a mouli, and you get a much chunkier texture. I tend to use this method when I have a garden full of perfectly formed but small tomatoes.

The second method is good for when your home grown tomatoes are a little less than perfect. Maybe they have a tad of blossom end rot or woody centres but most of the tomato is OK. Because you cut up the tomatoes you can use the good bits and send the rest to the compost heap, thus not wasting any of your crop. Also this method despite having to re-heat the pulp is actually quicker than the first method with all the tomato peeling. Another plus to this method is that you can mix in other vegetables. Although the recipe below is for tomatoes alone, when I made the batch in the photos, I had some courgettes that had raced off and were aspiring to be marrows, so they were peeled and chopped and added to the mix.  Red peppers work very well, but not green as they are too bitter. Onions, all types of squashes, auberines. All add thier own flavours. I would never go more than one third of the other vegetables to two thirds tomatoes.

Before I get into the recipe a note about jars. I keep all jars that have the type of lids that create a vacuum and have a plastic seal around the inside of the lid. These can be re-used as long as they will still fasten tight. The lids must not be pierced, rusty or bent round the edges  or they will not seal and create a vacuum. When you come to use them for preserving the passata they need to be hot and sterile. I find that a hot wash in the dishwasher with a steam dry works really well. You need to be ready to use the jars straight from the dishwasher when they are pretty well too hot to handle.

Alternatively, if the jars are already clean, put them with thier lids a few at a time in a large pan with boiling water and heat to a simmer to sterilize them. Fish them out, drain them and use while still hot.

For 1 kilo of tomatoes

2 or 3 cloves of garlic – finely chopped

If you are going for the second method, just cut up the tomatoes. Remember to weigh them after cutting if there is a lot of waste.

In a pan large enough to take all the tomatoes, heat the oil gently. Add the garlic and cook a minute or two. Add the tomatoes, bayleaf and seasonings. Stir to mix. Cover and leave to stew on a low heat for about half an hour. 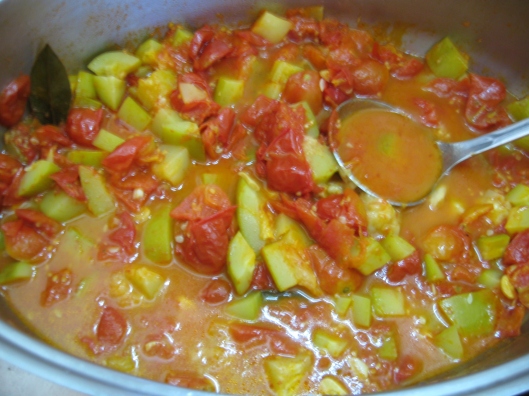 If you are with method one, taste the passata to check the seasonings and adjust accordingly. Then put in hot jars filling to half a centimetre from the top. Make sure that there are no bits of sauce around the top where the glass will meet the seal in the lid. You can just wipe the top with kitchen roll. To begin with put the lids on loosely, the passata will then warm the lid a bit more. After a couple of minutes you can tighten them up.

If you are on method two, put the pulp through the mouli using the coarsest disc, this will sieve out the pips as well as the skin. Return the pulp to the pan and bring back to the boil. Lower the heat and simmer for three minutes to kill any bacteria that may have infiltrated  the pulp. Then continue as above adjusting the seasoning and jarring up the passata.

The herbs in the passata can be changed as you like. Instead of the bayleaf, try fresh basil or oregano.