A base of sweet garden peas and steamed chard topped with braised butternut squash and lemony, garlicky red peppers – what’s not to like?

Let’s do the butternut squash first. The amounts are per person so just multiply or expand if you are mega hungry.

Half a butternut squash – peeled and de seeded then cut into chunks.

Fry in olive oil with a lid on so it can steam. After about five minutes turn the cubes and season with a little sea salt and freshly ground black pepper.

Let cook another five minutes, covered, then stir again and add a tablespoon of green pumpkin seeds. Stir in and let cook a couple of minutes more then turn off the heat.

Next the red peppers.

Cut them into short strips and fry in olive oil with some finely chopped garlic. Fry them on a medium heat so that they cook quite quickly and brown a bit.

When the peppers are almost cooked throw in a handful of cashew (or other) nuts and stir round and let cook until slightly toasted.

Remove the peppers to a small bowl and season with a squeeze of fresh lemon juice. 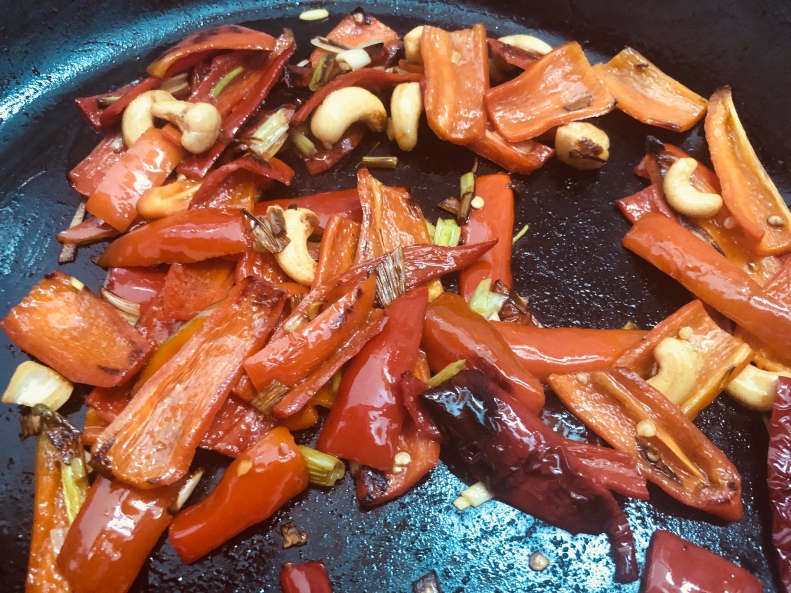 Cook the chard leaves in the same pan. The chard wants to be washed and cut into strips.

Add to the pan together with some frozen or fresh garden peas. Cover and let the chard leaves wilt.

Turn the chard over from time to time.

Once it’s cooked enough, turn off the heat. Season with salt, pepper and the juice of half a lime.

Assemble the salad with the chard and peas as the base, then scatter over the pumpkin and seeds, then top with the peppers and nuts. Yum!

1 thought on “A Warm Winter Salad”