I always smile when I see beautiful pictures of pristine white sofas on outdoor terraces in design magazines. Those of you who live in the cool north imagine that we in the south live the majority of the time outdoors with no real line between the outside and inside living space.  While to a large extent this is true, the line between the in and the out has to be more marked than you imagine, particularly if you live in the countryside.  The problem is that the creatures amongst whom I have decided to live quite like the protection of walls and roofs. It’s not that I mind sharing, but there have to be limits. My house is built around a patio which has a central open area surrounded by a roofed shaded part supported by columns. These shaded and protected areas are ideal habitat for nesting swallows. But when you get to four pairs of swallows producing up to forty eight offspring in a summer season, that is an awful lot of bird poo landing on your cushions, walls and floor each morning when they wake up and then each evening when they come back to roost. The Jackson Pollack look is, I feel, a little modern for an old Arab style house.

Then the young play dare swooping in and out of the doorways until the dimmest gets stuck inside and can’t find his way out. I have a two and a half storey tower in the centre of the house which beautifully draws the hot air up and out of its high windows and keeps the house cool without the need for air conditioning. It also traps lost baby swallows. Thankfully when young swallows sleep they sleep the sleep of the dead, so to remove them if they won’t fly low enough to go out of the doors that they came in through, you have to wait for them to go to sleep, usually perched on top of the bar of the wall hangings, and flick them into the swimming pool net before they know what is happening. The doorways are now sufficiently netted to stop the birds getting in.

Apart from the usual bugs that crawl in there are a variety of fliers. We have  long legged red wasps that like to find a nook in which to make little tubes of mud into each of which they lay an egg from which will eventually hatch a new wasp, but leaving behind the clay which is making the sound from you speaker more than muffled.

Bats are amongst the least troublesome guests. They just quietly roost on the patio walls. They do poo, but it is dry and like a small pellet of crushed insects, understandably, as that is what they eat. Easy to sweep up.

Geckos are other welcome guests who earn their place in the house by eating any insects that pass them by while they are skulking on the walls and ceilings at night. They come in a variety of hues and patterns so are very decorative too.

This spring I had a few hundred bees move in.

I first noticed some scout bees doing their informative dance on one of the beams in the patio. I rushed off to consult the internet about what this might mean and was informed that honey bees scout for new sites for the swarm each spring and several sites are usually considered, most being rejected. So I didn’t worry, my site being, in my opinion, unsuitable.

Some days later my neighbour and I were having a coffee in the kitchen when we heard a loud buzzing noise coming from the patio. The air was black with bees. Within ten minutes it was quiet again and not a bee was in sight. I breathed a sigh of relief – my patio I assumed had been rejected. Not a bit of it, on the other side of the patio, where I had seen the scout bees, the whole swarm had settled and looked as though they were planning to stay. I was just about to go on a trip for ten days, so nothing could be done immediately. When I returned the bees looked neater and organised into a rugby ball shape. 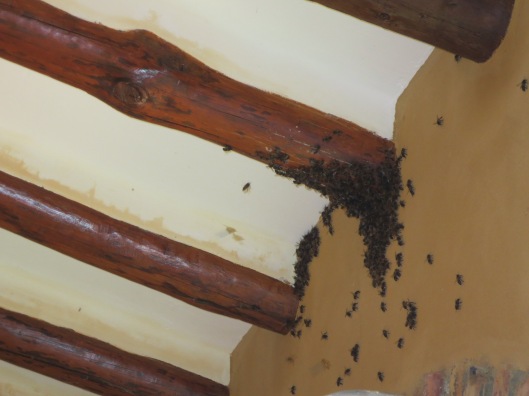 I like bees, but I foresaw in the heat of the summer honey dripping down from the swarm and making a mess on the floor, which was bound to be a magnet for ants. Plus all that bee activity only a metre or so from the summer dining table was a little too close for comfort. So they had to be relocated.

I asked around my friends and Antonio was recommended as the man for the job. He came and gave my bees a look over, and then returned the next day with a hive and his full white suit of overalls and a netted hat. Antonio carefully moved the swarm into the hive while I watched from a safe distance. Only later did I read that moving a queen was one of the most dangerous jobs for a beekeeper. 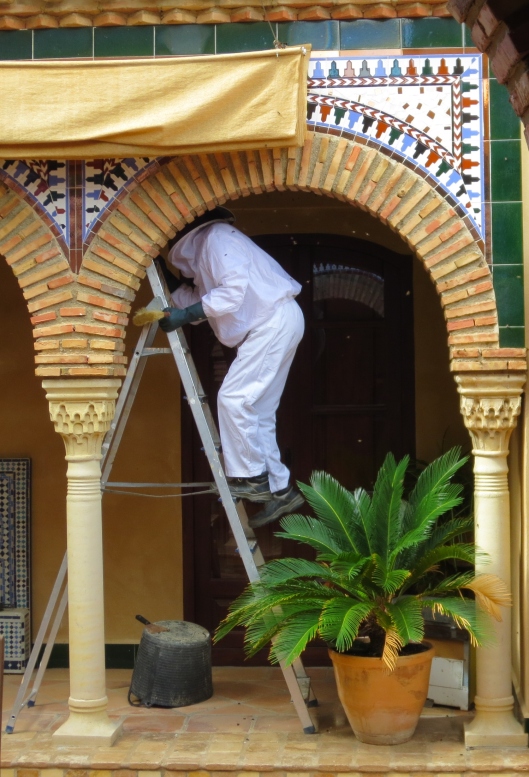 In the ten days or so that the bees had been in the patio they had constructed three round honeycombs about fifteen centimetres in diameter, and had already got quite an amount of honey stored in them as well as some embryo bees. I was quite surprised and impressed at how much work they had done in such a short space of time. Antonio advised that we leave the bees for two or three days to settle in when he would return in the evening once all the worker bees were back in the hive and take them to a new home. 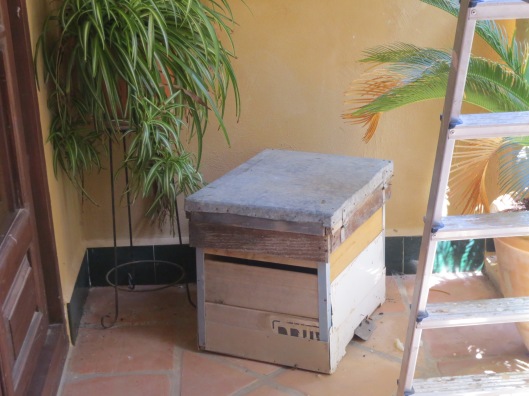 He enquired if I wanted to keep the bees and put the hive somewhere further away from the house, and I did consider the idea. But bees are precious and important creatures, and I have no knowledge or experience of beekeeping and wasn’t sure that would be able to look after them well enough.

The honey though, was delicious.

Here is a very simple northern Spanish dessert using honey. It is exactly my sort of dessert, mixing salt and savoury with sweet and nutty.  A mild immature sheeps cheese works best for this. 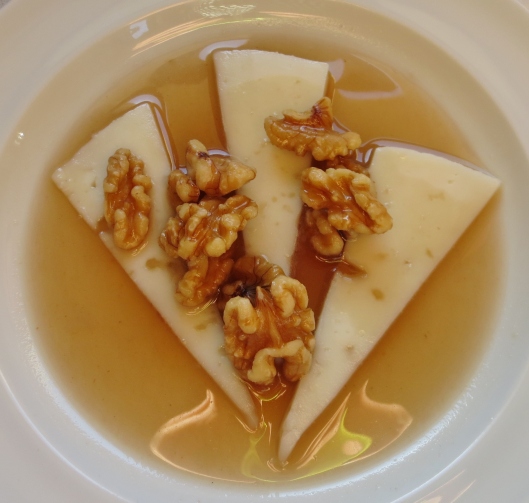 Slice the cheese and lay it out attractively on individual plates.

In a small pan warm the honey with enough water to have it pourable. When it is hot add the walnuts and heat them through for 30 seconds. Don’t  leave the walnuts too long or they will darken the colour of the honey.

Spoon over the cheese and serve.