……..or Smelts in Vinegar.  The word Smelt does not excite the imaginary palate in quite the same way as the word Boqueron. I assume its origin is from the word boca which translates as mouth and that Boqueron means a mouthful. And a delightful mouthful it is, whether dusted with flour and fried whole or marinated in vinegar as in this recipe which I was describing to my friend Andy while in France last week, and so it brought it to mind to share with you too.

This is regularly served as a tapa in Spanish bars. A couple of the fish will be presented atop a slice of fresh stick bread and sometimes with a good dollop of Allioli between the bread and the fish.

Cut the heads off your fresh smelts and open them out flat by opening along the belly and moving the flesh away from the bones on one side. There is no need at this point to remove the bones or the guts.

In a shallow dish that will take all the fish in one layer, pour enough white wine vinegar to cover the bottom of the dish. Lay the fish with the flesh side down into the vinegar.

Continue with all the fish putting them neatly side by side in the vinegar and then add more vinegar to just cover the layer of fish.

Put in the fridge for an hour so that the vinegar can ‘cook’ the fish.

Remove the fish one by one from the vinegar and remove the bones and guts. Lay in a clean dish. 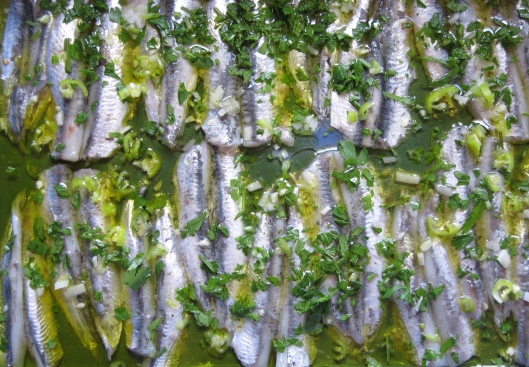 When you have done them all, pour over a generous amount of extra virgen olive oil and season the dish with finely chopped garlic and parsley. I added some chopped fresh green chillis as well, which are not traditional, but I like a bit of spice with my fish. Having a lime farm, and consequently having a lime or two lurking about, I have  used lime juice in place of the vinegar in this recipe which works very well and makes it more of a Ceviche, especially if you substitute fresh coriander for the parsley. Lemon juice should work too, although I haven’t tried it.

Put back in the fridge for half an hour or so for the flavours to develop and then serve with fresh bread.